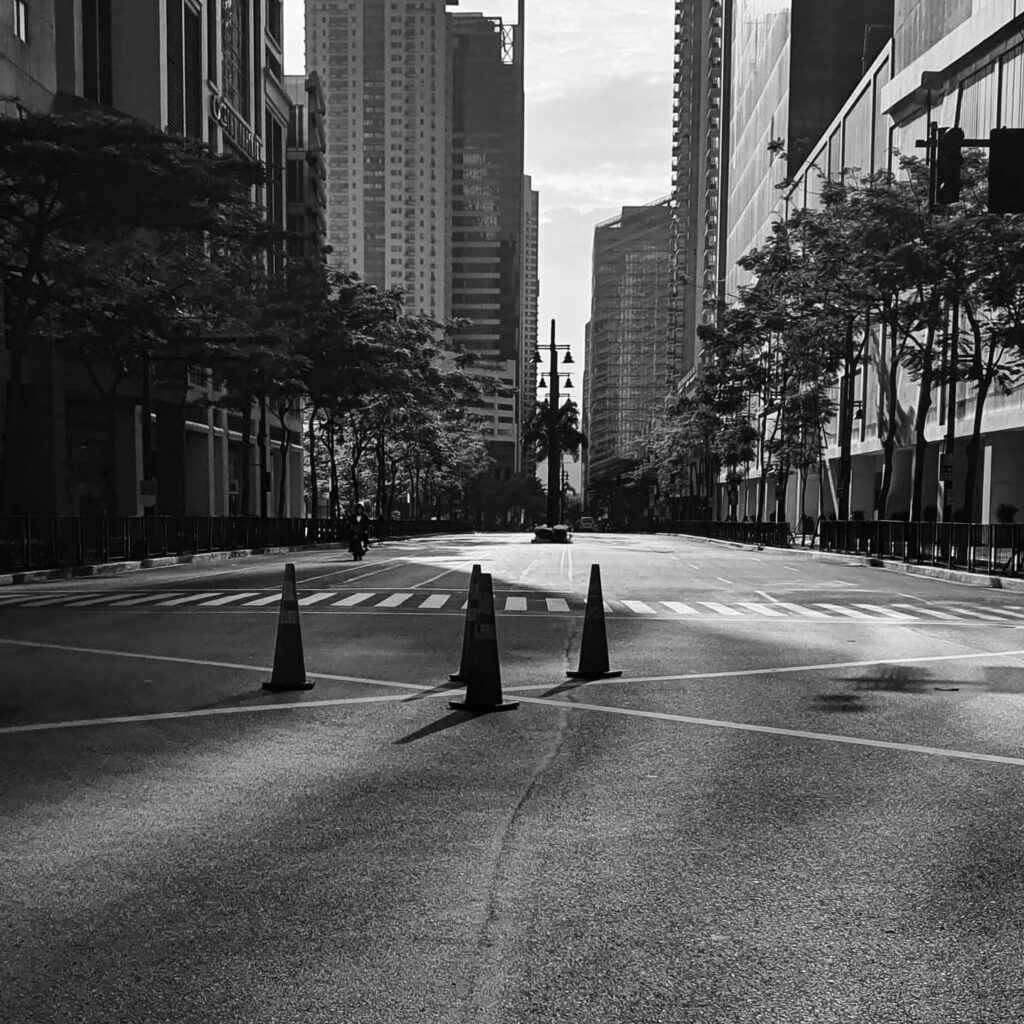 It didn’t rain as much on this day last year. I remember doing some last-minute shopping at the nearby Korean store, buying just a little more of the dumplings and meats and kimchi that I usually bought in the middle of the month. The lines at the supermarkets were just a little too long for me to bear. Somehow I cannot blame the panicked buyers for piling grocery bags high with all sorts of canned goods and rice bags and rubbing alcohol bottles: after all, we were just a few weeks removed from a volcanic eruption that covered Manila in fine, gray ash.

Just a few days before all that, all we were asked to do was to wash our hands, and maybe cough and sneeze on the crook of our elbows. It has gone through many versions since then: using a very particular kind of mask, wearing an acrylic face shield on top of it, installing plastic films inside public utility vehicles, and staying at home. A thing that was supposed to last just so, until we found ourselves exactly where we are today.

It rained hard this afternoon: March 15, 2021. It’s been 365 days since lockdown. And in those brief moments that I spent waiting for the rain to die down before I can head back over to my apartment, I wondered—briefly—if the summer rains carried the coronavirus, too.

For as long as I’ve lived here, Manila’s identity was—and is—shaped by its lights and noises. It simply couldn’t be the megacity it is without the roar of jeepneys on crosswalks, the sounds of karaoke and bass-heavy dance hits competing with each other on narrow side streets, the outlines on certain skyscrapers that are vaguely reminiscent of Christmas lights. Manila comes alive not because it never sleeps, but because it is never still. That seeming chaos is precisely the sort that keeps people alive.

And then it all stopped, and seemed to stop for good. All thoughts of “Mother Nature cleansing itself,” and every trite promise of a new day coming after quarantine is over, gave way to that grim thought that it’s a long way from over. Every Presidential press conference on Covid-19 updates, every Laging Handa briefing, and every infographic shared by the press isn’t a countdown to the end of lockdown, but an assurance that it will persist.

That realization sank in with the rising Covid cases, the increasing death toll, the warnings of healthcare workers painting a portrait of the misery in the wards: from the lack of ventilators, to ICUs filled beyond capacity, and nurses and doctors dressed in makeshift PPE fashioned from garbage bags. There was really no choice but to hunker down, to prepare the apartment for the long haul, and to wait.

Waiting, after all, never killed anyone. Unless you were that woman in the Pasay footbridge who actually died waiting for a way to get home, buried in a pauper’s grave somewhere. I called a friend, who covered the woman’s story for ABS-CBN before it shut down. I could sense that she cried for a good hour before I called. It was just so eerie to realize that the woman died in a place known for the noise of buses and barkers and vehicles of all kinds. That, and that she died waiting.

If waiting never killed anyone (else), it would have certainly brought people closer to it than starvation. There were those particularly depressive moments in lockdown when, while building a case, I would stare with trepidation at unemployment rates, and wonder about job cuts. Looking back, it was that sense of dread that fueled me the most. There must be more to do, there must be more to be done: if only because of that lingering, persistent fear of not being able to make or provide. Everything wrong that persisted somehow translated into an attitude of persistence. Fear, like adrenalin, can make people do many seemingly impossible—if not irrational—things.

We persist because we have to. Like the virus that persists into the body of a host, for the lack of a better analogy.

A few months into the lockdown, a sense of “normalcy” started cropping up around me: not physically, but on social media feeds I’ve taken to browsing to the dead of night. Friends have taken to the beaches, to restaurants, to hikes. But whatever sense of jealousy and resentment that I had was quickly washed away as I keep scrolling on to see posts of people praying for work. Or the collective anger and raging against government incompetence. Or of friends and acquaintances I’ve never got to say goodbye to, most of them taken by a virus that some of us no longer want to cure, but simply want to escape from.

A year into the lockdown, I realize how much of it is really grief. Not the sort of grief that comes with watching funerals on Zoom, but the sort that howls inside you and has no way to go out, quite literally. To grieve silently, in that state of being imperially alone, is a small price to pay than to cope with—and through—having something unique to share on Instagram.

Between March 2020 and today, we’ve had over 600,000 cases of Covid-19 and over 12,000 deaths, and the numbers keep growing. Our penchant for acronyms showing in the many nuances and dimensions of “community quarantine.” We have been locked down long enough for things like “ECQ” and “GCQ” to become loose suggestions more than anything. After twelve months of lockdown, the “New Normal” has transformed into a matter of fact. Less of these being “normal” though, but more of all these things being “new.” And that comes with letting the old vanish into memory.

Joan Didion once wrote that grief “comes in waves, paroxysms, sudden apprehensions that weaken the knees and blind the eyes and obliterate the dailiness of life.” Somehow, it becomes difficult to phrase the Covid lockdown in any other way than that.

I’ve spent most—if not all—of 365 days in the confines of my apartment. I once played video games and read books in my living room, and now I work here. Once upon a time, I left the office just so on a Friday night once a month to catch a movie in Central Square: I don’t think that will ever happen again. There used to be joy and anticipation at around this time of the month where I would take a well-deserved vacation: I now dread the idea of airports.

I guess it’s easy to dismiss all these thoughts and notes as a little too dramatic: the sort of inappropriate theatricalization of something that is ultimately scientific, and where politics should be equally as clinical. Or the dramatization of mundane experiences that are inconsequential to the bigger picture. But whenever we talk about “losing lives to Covid,” I also cannot help but think of losing a way of life: that prolonged lockdown has made us lose so many things about life, too.

The coronavirus—and the responses around it—have not only taken lives, but also livelihoods and lifestyles and ways of living. Of things that were, and may never be again: memories, habits, doses of sanity. And how all of these weave into a bigger narrative of grief: one that spans the nation, one that lasts much longer than wakes, one that will persist through our lifetimes and through generations.

That if there’s anything to grieve for, it’s how life once was.

For a brief moment, the rain stopped: I surmised that the rainshowers would stop long enough for me to make it home. I made it to the pool area just so, when by some accident my face mask unhooked itself from one ear, and for a brief moment I was exposed to the air of the summer rain my parents warned be about as a child. The caterpillars were certainly out there somewhere. I could see a bit of haze forming on the ground. Somewhere in a forsaken metropolis—ground to a halt for the most part of a year—there will be wheezing and sneezing and coughing that would, when worse comes to worst, will be another number in a growing tally of infections and deaths.

I look back at the year I had: the friends I’ve lost touch with, the family I’ve yet to come to home to, the opportunities that I missed, the lives that were lost, that life that passed by as I tried my very best to keep locked down. To comply, to obey, to hang on to that last miserable thread of hope: that all this is done because of a version of life that seems so close, but still so far.

Just before I fitted my mask back on, I breathed that rainy summer air in.

A matter of exhaling